It's not often that Wonder Valley is mentioned in a national financial magazine like Forbes, and in a sense we really weren't. It was Wonder Valley Olive Oil, the olive oil not made here, and more and more associated with Joshua Tree.

Here's the mention:
How A Trip To Marfa Boosted This Brand's Bottom Line

"We met Alison and Jay Caroll who left their life in LA to move to the Mojave desert and start Wonder Valley Olive Oil company. They were the most inspiring couple; their travel, simplified life in Joshua Tree and desire to create something and work with their hands."

This is all seems to be true.
Posted by Ken and Teresa at 7:56 AM 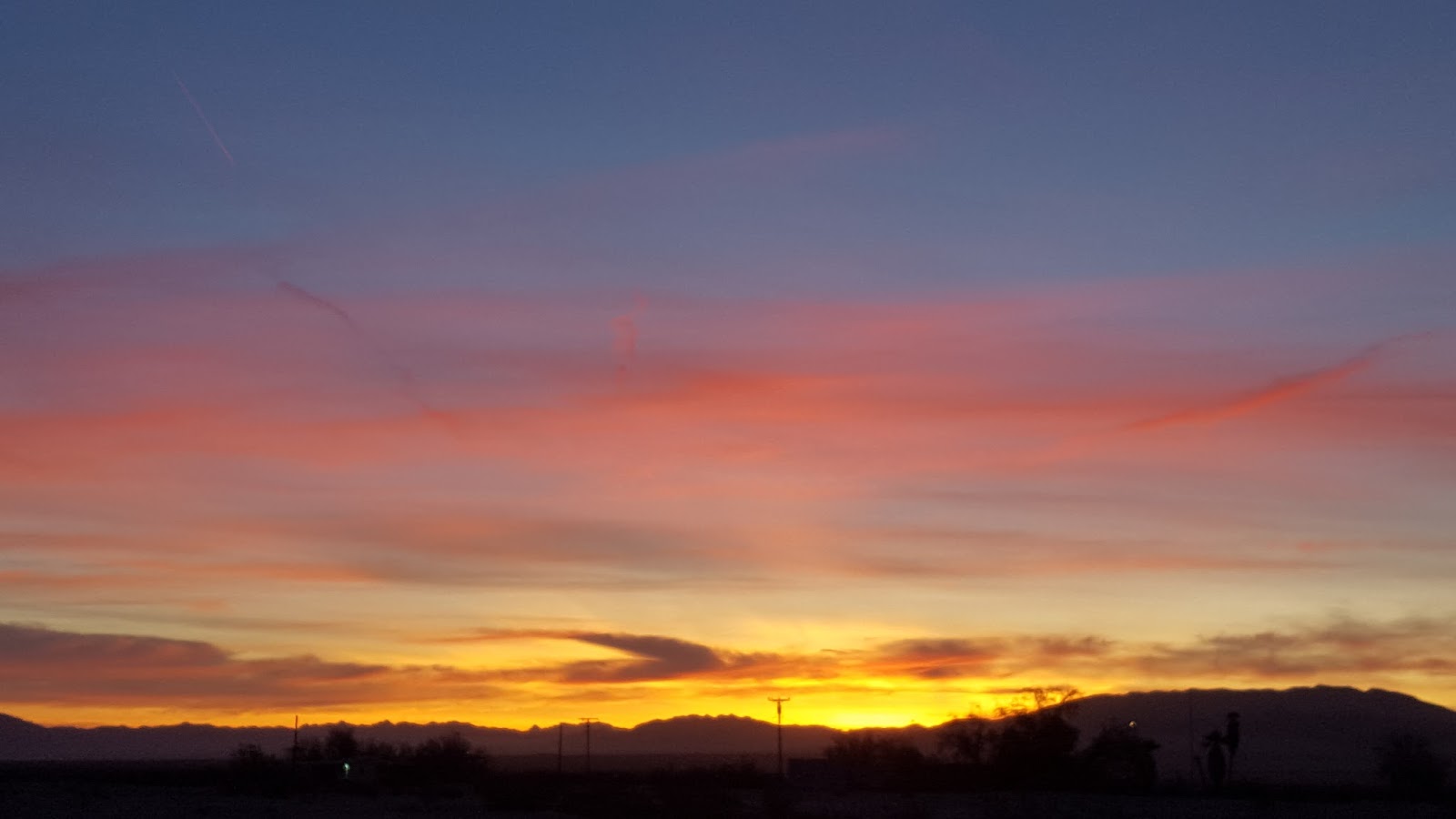 Everyone is invited and welcome to attend and participate in the
WV December Community Meeting
from 11 a.m. to 1 p.m. on Wednesday, December 13, 2017
at the
Wonder Valley Community Center
80526-1/2 Amboy Road, Wonder Valley CA 92277

Representative from the Marine Corps Air Ground Combat Center (the "Base")
to discuss illegal shooting, the dumping of animals, and other issues.

Many thanks to the businesses and organizations below who reach out to those in need through the holidays.

NOVEMBER 19
The Joshua Tree local free food program is serving a vegetarian/vegan Thanksgiving celebration at 5 p.m. on November 19, at the United Methodist Church, 6213 East Parkway, in Joshua Tree. Vegetable will be distributed to those in need. Please bring your own place setting.

NOVEMBER 21
The Way Station provides free raw turkeys and Thanksgiving dinner fixings for anyone in need on November 21. The gates open at 8 a.m. You must be signed up between 8-10:30 a.m. The Way Station is located at 61722 Commercial Street, in Joshua Tree. Catholic Charities will be present to help with utility bills. A continental breakfast with hot beverages will be served.

Andreas Char-Broiled Burgers offers a free ham and egg breakfast from 7 a.m. - 3 p.m. on Nov. 23. They are located at 73780 Twentynine Palms Highway in Twentynine Palms.

The Beatnik Lounge is offering a vegan potluck from 3 - 6 p.m. at 61597 Twentynine Palms Highway in Joshua Tree. Bring a healthy vegan dish, if you can, and a place setting for yourself. No charge and no one turned away.

Food for Life offers a free Thanksgiving meal from 1 - 4 p.m. on Nov. 23 at the First Baptist Church, 6414 Split Rock Avenue in Twentynine Palms. The church will also be distributing a limited number of coats and blankets.
Posted by Ken and Teresa at 10:58 AM 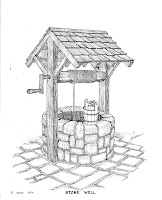 The Dale Basin Well Owners meeting was held on November 12. Clarence Chambers resigned after 18 years serving as President, and Mary Quamme is looking for someone to take her place as Secretary-Treasurer. She has also held this position for 18 years. Former Vice President Jerry Peek is the newly-elected President and Max Rossi is the new Vice President.

Huge thanks go to both Clarence and Mary for their many years of service and assistance to the well owners in Wonder Valley.

The USDA Food Distribution will take place at our Wonder Valley Community Center, 80526½ Amboy Road near Blower Road, on Monday, November 20 from 10:30 to noon.

The Salvation Army Food Distribution will also be this week, on Wednesday, November 22 at the Wonder Valley Community Center from 11 a.m. to 1 p.m.

Since the birthstone for November is the topaz and the flower is the chrysanthemum, we send out Rainbows-of-Topaz-and-Chrysanthemums to Karen Meyers (75) and Sharon Fangmeyer who celebrate their special days this week. Happy birthday to you both! 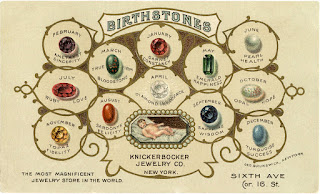 And Anniversary wishes go out to Bill and Sherry Hague this week. Congratulations, Sherry and Bill! 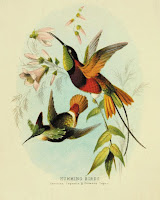 Darlene’s Commentary: I enjoyed reading an article about birds in “Tidbits” and would like to share some interesting things with you. Hummingbirds must eat more than their body weight each day. All domestic breeds of chickens originated with the red jungle fowl of Southeastern Asia about 8,000 years ago. The albatross can fly thousands of miles without ever landing, even sleeping on the wing. It shuts down half of its brain at a time, placing the other half on auto-pilot!

Karen’s Commentary: First, many thanks to columnist Fran Becker for the kind words regarding the loss of our little dog. Second, thanks to Annie French for sending lots of nicely cut-out coupons for the military families overseas. And last, congratulations to husband Ted for bringing home four more ribbons from the Weed Show! The competition this year was fierce, with the number of fantastic entries at an all-time high, but Ted came through once again, proving how talented he really is.

If you’re looking for Wonder Valley information, go to www.wondervalley.org. Ken and Teresa Sitz do a bang-up job keeping this website updated and interesting.

Handy Hint: For a unique coffee table with storage, top four wooden crates (open sides facing out) with an old door. You can screw everything to a plywood base and add castors if you like. The vintage look is very popular!

Thought for Today: “I wonder if other dogs think poodles are members of a weird religious cult.” – Rita Rudner

Until next time . . . remember to take time to enjoy the WONDERs all around us.
Posted by Ken and Teresa at 10:58 AM

There was non-stop shooting in some areas of Wonder Valley over the Veterans Day weekend, starting at daybreak and continuing until dark. The shooting included pistols and high-powered assault weapons. Only shotguns are legal in Wonder Valley including on BLM land. There were 10 calls to the Sheriff's Department over the three day holiday, with deputies responding. No citations were issued.

I, Teresa Sitz, asked Lt. Barta of the Sheriff's Department, about the calls at last Monday's MAC meeting, and read the public comment of an elderly disabled resident who could not attend the meeting. Tom Zeigart of Yucca Mesa also commented on the issue.

On Tuesday, three residents including myself, attended the Board of Supervisors meeting and gave public comment. My comment is listed below.

Lt. Barta pulled me out of the meeting to discuss the issue. He was in receipt of photographs taken of the shooters and he gave me his contact information so that we could continue to work on the issue.

ON ILLEGAL SHOOTING IN WONDER VALLEY

Good morning. My name is Teresa Sitz and I have served as the MAC Delegate for Wonder Valley for the last three years. I want to thank the Board of Supervisors for making the Bob Burke Government Center available for us for public comment. I also appreciate the attention and support that the Board has given Wonder Valley in the past.

I am here today to address a serious ongoing issue in Wonder Valley - the illegal shooting of firearms, especially high-powered pistols and rifles. This issue has come up many times in local community meetings, and we have attempted to address it by working with the Sheriff’s Department, the Base, the BLM, and the MAC.

The main obstacle to solving this problem has to do with jurisdiction. Though the County forbids shooting anything other than shotguns in Wonder Valley, many residents and visitors feel that if they step onto BLM land within the checker board of Wonder Valley that they can shoot anything they want, any time they want. Confusion about jurisdiction makes enforcement difficult.

The BLM has told me that County rules regarding shooting apply on BLM land within the boundaries of Wonder Valley, but they have issued no official statement that can be used to clarify the law to the Community, to the Sheriff's Department, and to visitors. And so the shooting of pistols and high-powered rifles continues, with both residences and roads within the trajectory of high-powered rounds. It is only a matter of time before somebody is accidentally wounded or killed.

Another problem is that when the Sheriff’s Department is called to the site of shooting, the shooters stow their illegal weapons and tell the Sheriff’s Department that they were only shooting shotguns. It may not be possible to enforce current laws against long-range pistols and rifles in our neighborhoods without making shotguns illegal, as well. I believe it is time to consider this as a solution to ending illegal shooting in Wonder Valley.

My neighbors complain to me that many Sheriff’s deputies do not know the law regarding illegal shooting and are therefore unwilling to enforce it. At this time, especially during the holidays, our neighborhoods are under siege, with high velocity weapons being fired within range of our homes from dawn until dusk. Without the Sheriff's Department to enforce the law we have no one to turn to for help.

I ask the Board of Supervisors to work with our community to keep us all safe from illegal shooting in our neighborhoods.

Thank you for your time.
---
The County Firearms Ordinance may be found at the link below:http://cms.sbcounty.gov/parks/FishandGameCommission/FirearmsOrdinance.aspx

The BLM: Target Shooting on America's Lands
https://www.blm.gov/programs/recreation-programs/recreational-shooting/california
Public lands administered by the Bureau of Land Management (BLM) are available for a variety of undeveloped recreational activities, including target shooting except where prohibited by federal, state, and local laws.

If you love the "idea" of Wonder Valley, but maybe not the reality, this is the vacation rental for you: "The Big Blue of Wonder Valley (but really located in Joshua Tree)."

Our industrious and hip friends at Wonder Valley Olive Oil offer this vacation rental on their site WelcomeToWonderValley.com.  Stay for $145 a night. Book your visit at https://www.airbnb.com/rooms/17026036. 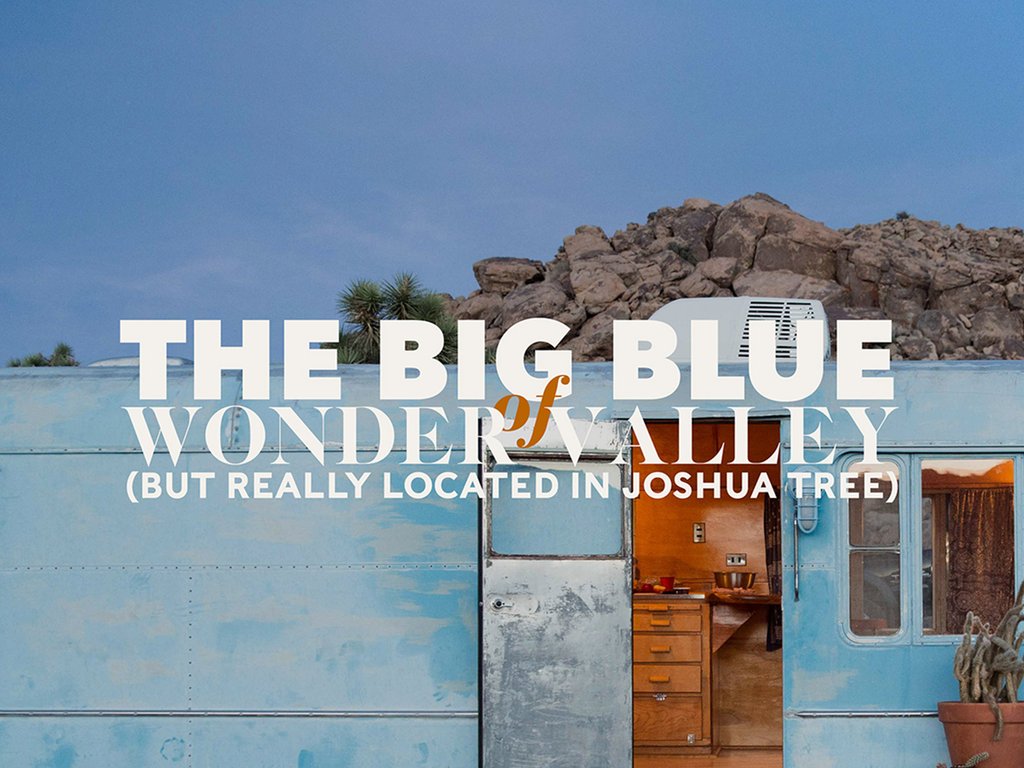 Everyone is invited and welcome to attend the biannual

If you have a well, come join - only $5 per person per year.
There will be annual elections, too, so if you'd like to be involved - now's the time.
Posted by Ken and Teresa at 2:27 PM