Meeting called to order 5:01 PM with 28 Zoom participants (This was a virtual meeting as the WVCC is currently closed due to the COVID pandemic)

Steve Reyes announced that the position of Wonder Valley representative for Supervisor Dawn Rowe's Morongo Basin MAC is open again with the dissolution of the existing MAC with the conclusion of the Supervisor's term as appointed replacement to serve out the term of the previous supervisor. A new MAC will be appointed in the beginning of 2021 and applicants can apply to the County and be interviewed for the position by filling out the form here: http://www.sbcounty.gov/COB/Main/NewBCCApp.aspx

Steve stated that he has re-applied and Supervisor Rowe's field representative for the Morongo Basin Mark Lundquist later added that the acceptance of applications is for 30-days with interview followings. The process is not expected to be completed and a new MAC seated until March 2021.

Amboy Road resurfacing has been completed and the County has said it will (unfortunately) not extend beyond the curve.

Steve encourages people to use SB County Code Enforcement to report any issues including about grow houses and recommends the easy to use online complaint forms http://cms.sbcounty.gov/lus/CodeEnforcement/Complaints.aspx

The County will not be able to respond to the recent growth of graffiti by overpainting because the graffiti is on private property [Note: neighbors have been known to cover-up the graffiti ad hoc on neighborhood structures.]

Steve and Supervisor Dawn Rowe field representative Mark Lundquist gave an update on illegal marijuana grows. Steve mentioned that the 2016 law that makes cultivating marijuana a misdemeanor has limited law enforcement options. [Jennifer Ruff who works in the cannabis industry disputed the misdemeanor status and said it was still a felony to sell. See SBC Code of Ordinances on Commercial Cannabs Activity at bottom of theses notes]. Steve has met with the Sheriff about the enforcement efforts that have been concentrated in the Landers and Lucerne area. Mark noted that the Highway Patrol (CHP) has joined in the effort to stop and cite trucks servicing the grows (in the first day in Lucerne, 7 trucks were impounded for various issues, tags, tailpipes, etc). Mark says the County task force does not have an exact number of grow houses in the hi-desert but it's estimated to be between 600-700. Steve estimates there are ~50 in Wonder Valley and Mark said the County task force is beginning to work on Wonder Valley with 9-10 grows cited last week, and to remain patient as the task force develops more techniques to rein in the illegal grows. Due to the numerous issues involving the illegal grows (water usage, noise, road degradation, etc) Steve will work to put together a special community meeting for January.

Special Districts Recreation Director Frank Haggard who oversees both CSA 70M* (Wonder Valley) and CSA 20 (Joshua Tree) presented a planning update for the remodeling of the Wonder Valley Community Center kitchen and bathrooms to bring them up to health code and enable the kitchen to be a commercial kitchen available for events and rental for production (the Joshua Tree center currently has two commercial kitchen that are contracted for local food production). The CSA 70M upgrade includes new park equipment and remodeling to bring it into compliance with the ADA (American with Disability Act). Frank is asking for community feedback through this online survey and hopes to identify people and groups willing to work on seeing the project through. Kelly Hake requested a carousel for the park and Frank thought this was a great suggestion and said to put that into the feedback and that it was one of his dream projects too. https://specialdistricts.wufoo.com/forms/xd09r2u1qu4rdv/

Frank also presented the Phase II plan for the Desert View Conservation Area (DVCA, aka 'Section 6'). He is seeking community feedback on the DVCA Phase II plan at https://specialdistricts.wufoo.com/forms/x14n5snn0pzisjb/

Agenda Items for Next Meeting

Steve will work with the Sheriff to put together a community meeting on the illegal marijuana grows for early next year (January if possible).

The one thing I wanted to do was to recognize and thank certain individuals who have been instrumental in keeping Wonder Valley afloat during this trying times.  I asked Mark Lundquist if there was a way San Bernardino County could accomplish this.  Without hesitation, Mark Lundquist recommended a Certificate of Recognition signed by Supervisor Rowe.

Max & Olympia Rossi - Pastor Max and his wife Olympia have offered spiritual support to people living in Wonder Valley.  Living in a rural community offers its own challenges and the Rossi's continued their efforts regardless of the current environment.  Olympia learned of a fresh fruit and vegetable program and she quickly organized volunteers and distributed much need produce.

John Bradford / Dylan Baudounie - Special Districts and Road Maintenance - Our road grader has been doing an outstanding job in maintaining our roads and keeping traffic flowing.  Traffic includes much needed services provided to the most fragile members the community.  On many occasions, I have spoken to John Bradford and made special requests in regard to sign replacement and the grading of specific roads.  On each and every occasion he has directly helped me and or directed me to the correct county entity.

Randy Harrison - (UPS) - Randy our beloved "UPS Guy" never stopped his timely and much needed parcel deliveries.  His deliveries are a gamut of Amazon, medicine and food.  His service to Wonder Valley cannot be underestimated!  Randy knows all the roads in Wonder Valley and always delivers packages as close to peoples doors as possible.  Randy once told me "I am just doing my job."  In these difficult times this cannot be further from the truth and his efforts are truly appreciated by all.

unincorporated area of the County. Any person violating any provision of this Chapter is guilty of a misdemeanor, punishable in accordance with the provisions of Chapter 86.09 (Enforcement) and Chapter 2 of Division 1 of Title 1 of this Code. Notwithstanding the foregoing, a misdemeanor violation may be cited, charged, and prosecuted as an infraction. This Section shall not affect the right to possess or use cannabis as authorized by Federal or State law.

The County of San Bernardino has filed a lawsuit with the California State Supreme Court asking that stay-at-home orders be annulled.

County lawyers wrote, "The County seeks this instant writ to reclaim its police power over its residents and vast land mass, with incorporated and unincorporated areas, to enable it to tailor regulations and orders which are specific to its residents based on facts which are unique to their locations rather than subject its residents to overbroad multi-county, Governor-implemented, regionalized lockdowns,”

The whole of San Bernardino County has just 41 ICU beds.

47 similar suits have been dropped or dismissed. This writer wonders if the San Bernardino County Board of Supervisors is using this suit to look tough while knowing full well that it is an empty gesture. 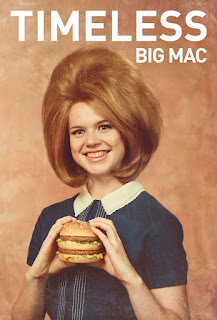 Now's the time to apply to become the Wonder Valley Municipal Advisory Council (the MAC) representative. The "Big" MAC (as it is affectionatly known) is a 9-person advisory council including reps from the other unincorporated communities in the Morongo Basin: Copper Mountain Mesa, Yucca Mesa, Desert Heights, Landers, Morongo Valley, Pioneer Town, Wonder Valley, and two others that I can't remember. The MAC advises our 3rd District Supervisor Dawn Rowe.

If you wish to apply for this VOLUNTEER position, go to:
http://www.sbcounty.gov/COB/Main/NewBCCApp.aspx

You will need to be able to pass a background check.

As a MAC rep you will field questions from residents in Wonder Valley, communicate concerns that need to go to the supervisor, and bear the weight of all the gratitude you will recieve.

New Projects in the Works.

SBC Special Districts are currently in the process in applying for special funding for a couple of projects to benefit the Morongo Basin. The first is an upgrade to the Wonder Valley Kitchen and Playground. The second is a Phase II project for the DVCA Recreational Trails. This Presentation briefly outlines the projects.

Please go to these perspective surveys to provide input on these projects or to express interest in being more involved in the planning process:

Click here for a .pdf file of photos of the DVCA Recreational Trails Phase I project completed 06/30/2020.

Thank you for your support! 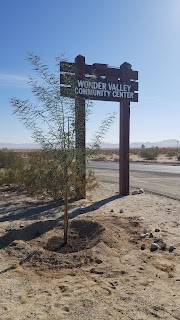 The old mesquite tree at the east end of the Wonder Valley Community Center came down in a recent storm. The two ash trees on the edge of the parking lot succumbed in the summer. The County has replaced them all with new mesquite trees.
Posted by Ken and Teresa at 12:14 PM 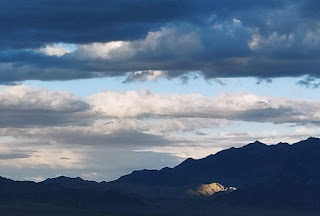 Everyone is invited and welcome to attend and participate.

1. Call to order and flag salute

3. Offer the opportunity of guests to address the community

The community is invited to suggest items to place on the next meeting agenda.

MAC meeting tentatively scheduled for Monday - January 11th,
2020, on Zoom (date to be confirmed and link to be announced). 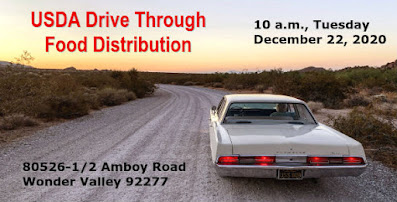 Our Wonder Valley distribution is the last one, below.