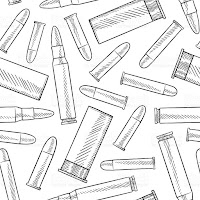 Two Twentynine Palms men, who are convicted felons, were arrested Sunday after they were found with guns and ammunition. According to a Sheriff’s report, about 1 p.m., deputies were called to an area north of Pinto Mountain in Wonder Valley for reports of shots fired. Deputies saw a Nissan Frontier leaving the area, which tried to flee, but got stuck in the sand. Two men, later identified as Victor Guerra, 33, and Robert Prudholme, 28, then fled from the vehicle into the desert. They were detained after a short foot pursuit. A records check revealed Guerra was a convicted felon on parole and Prudholme was also a convicted felon on probation. Deputies searched the vehicle and located a semi-automatic AR-15 rifle, a .38-caliber revolver and 400 rounds of ammunition.
Victor Guerra and Robert Prudholme were both arrested for investigation of being a felon in possession of a weapon and ammunition, booked into the Morongo Basin Jail, and are being held without bail for violating the terms of their parole and probation.
- - - - -
Some of you express skepticism about calling the Sheriff's Department on these kinds of violations, but people kept calling on this and it paid off. These two will not be back any time soon.

When you call the Sheriff's Department, ALWAYS ask for an incident number.
Posted by Ken and Teresa at 10:09 AM