Comedy at The Palms 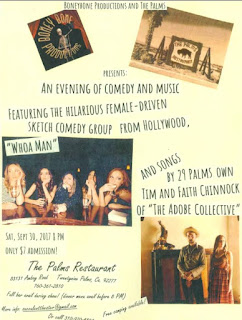 Boneybone Productions and The Palms presents:
An evening of comedy and music featuring the hilarious female-driven sketch comedy group from Hollywood, "Whoa Man," and songs by 29 Palms' own Tim and Faith Chinnock of "The Adobe Collective."