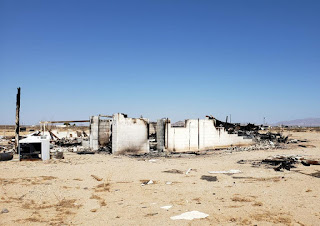 The second fire was on the east side of Shelton Road, reported at 2:42 a.m., on August 21, 2021.* The remains of the fire were still smoking this morning when this photograph was taken. This was the pink house. 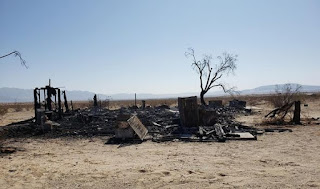 Both fires were listed as 451s. California Penal Code 451 PC states that “a person is guilty of arson when he or she willfully and maliciously sets fire to or burns or causes to be burned or who aids, counsels, or procures the burning of, any structure, forest land, or property.”

*The Morongo Basin Sheriff's Department Media Summary records the calls at these times.