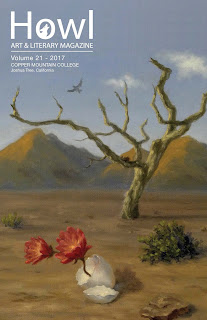 Or, you can read it below.

The Mayor’s House
By Teresa Sitz

The other miners called Audrey Beryl “The Mayor,” and her shack in the Pintos “The Mayor’s House.” She built it at the top of a steep and treacherous path, overlooking the camp, with the intent of dissuading drunks from stumbling up and banging on her door after their money and luck ran out. A very few tried, but even fewer after Eugene Crane was found one morning down the ravine, badly hung over, and with a broken leg. Audrey roped down and with the help of a few others, hoisted Gene up the side, set his leg and tended his many wounds. She’d lost a day of work due to it, but Gene lost more. He was never able to return to his claim.

Audrey built a rocker cradle and managed to pull $300 of gold
out of her placer claim over the first three months of the year. Along with her mules she’d take her rifle, tools, canteens, a hunk of bread and cheese, and a book. Wild lavender grew along the sheltered side of the dry wash and when the sun crested about 10 a.m. the scent of lavender spread on the warm air like jam on toast. Those days Audrey felt established in her ways, though she was 26, single, and wore pants under her skirt.

Stories about Audrey swirled through the camp and many a telling
ended with a blackened eye. Audrey was loved, and a bit feared. She wouldn’t step foot into either of the saloons, even though it was 1889. She took her meals around back with the wives, children, Mexicans, and any native passers-by.

Wilson always left before sun up, silently and deftly goat-stepping
down the path in the dark. A year passed before their tryst was exposed. The only story that made sense to minds simpled by the incessant din of the stamp mill was that Audrey was a whore. It was then that Audrey packed up her mules and made a claim
in Morongo, some 50 miles west. Wilson spent more time freighting to and from the grade. When they married the notice in the paper read,

“Another volunteer has been enrolled in the noble army of
miners and prospectors. ‘Quartz’ Wilson, of county fame, deserves the credit for enlisting a fair partner of his joys and prospects. The happy couple leave to-day for their home at the Palms.” 1

Over time Audrey’s name and occupation were forgotten. Unable
to imagine a woman mining, loved, maligned, and born anew, “The
Mayor’s House” was wedged into the space in history books reserved for “red light districts.” But the sand between the pages tells a different story and this is the gold that I have panned for you.