What do volunteer firefighters do?

Wonder Valley is asking residents to step forward and take the EMR training from June 13 to July 13, and then in the fall take the fire technology training. Both programs have hours that accommodate the schedules of working people.

To be a volunteer or paid call firefighter you must be 18 and have a clean record. Most volunteer firefighters have other jobs. Many are limited in the work they can perform. All must be able to be an emergency medical responder.

If you're interested in becoming a paid call firefighter contact Teresa Sitz at teresa.sitz@gmail.com, or attend the information session on Saturday, April 16 at 2:00 p.m.
For more information see: http://www.wondervalley.org/2016/03/emr-emergency-medical-responder.html 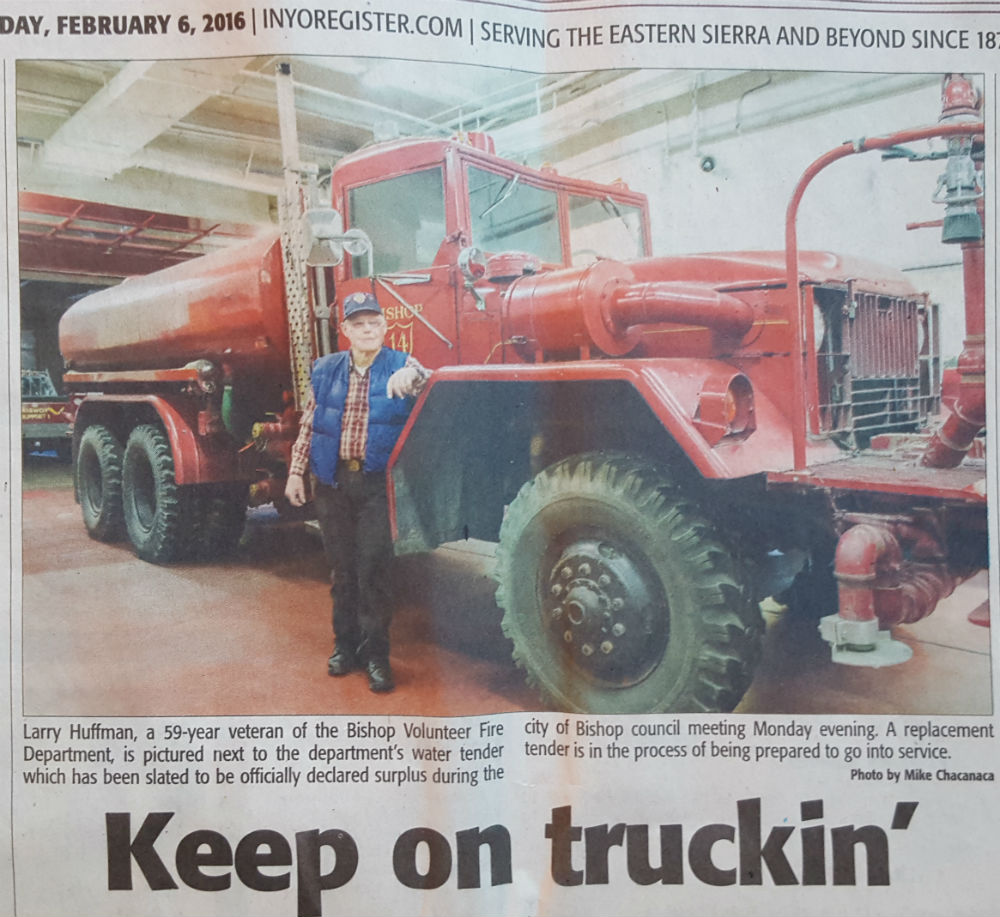 Keep on truckin'Larry Huffman, a 59-year veteran of the Bishop Volunteer Fire Department, is pictured next to the department's water tender which has been slated to be officially declared surplus during the city of Bishop council meeting Monday evening. A replacement tender is in the process of being prepared to go into service. 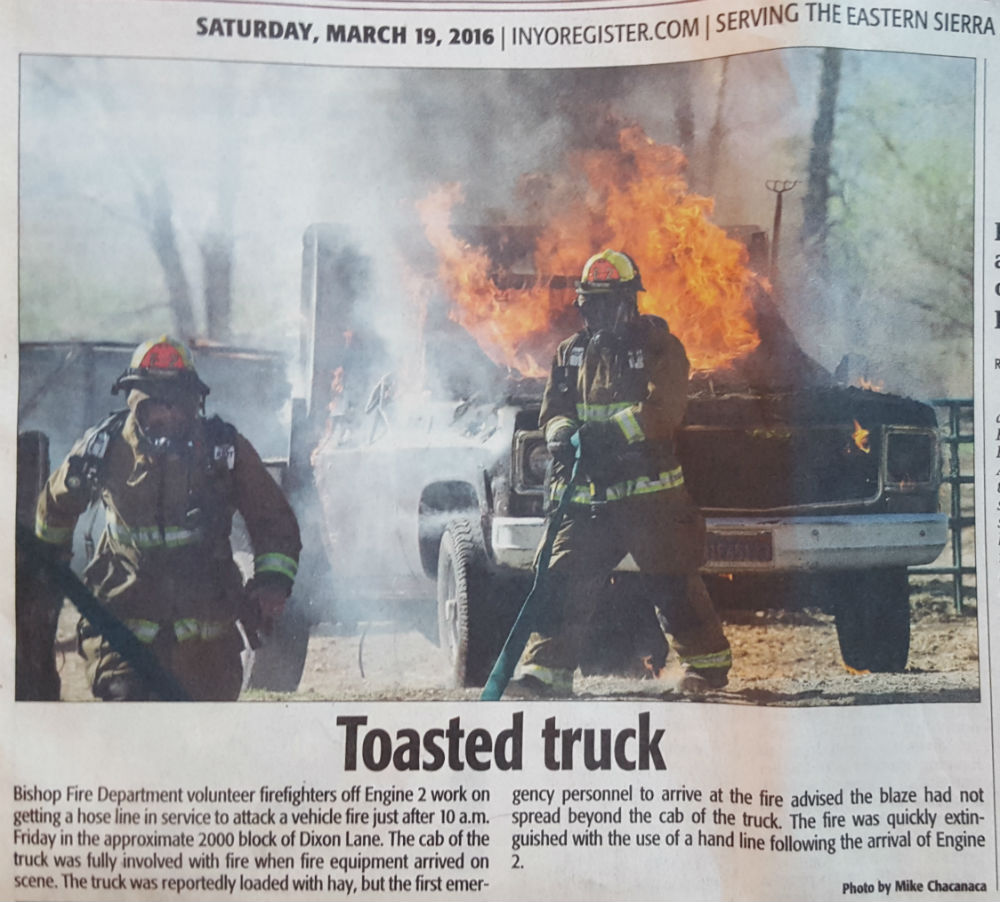 Toasted truck
Bishop Fire Department volunteer firefighters off Engine 2 work on getting a hose line in service to attack a vehicle fire just after 10 a.m. Friday in the approximate 2000 block of Dixon Lane. The cab of the truck was fully involved with fire when fire equipment arrived on scene. The truck was reportedly loaded with hay, but the first emergency personnel to arrive at the fire advised the blaze had not spread beyond the cab of the truck. The fire was quickly extinguished with the use of a hand line following the arrival of Engine 2. 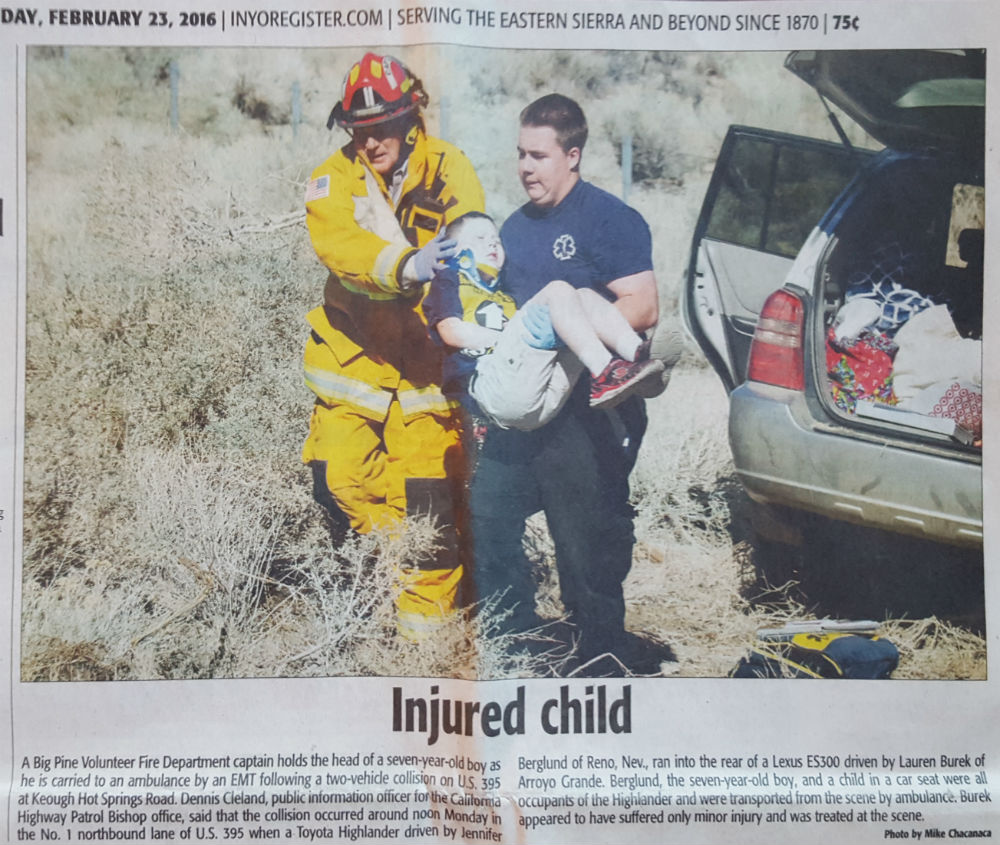 Injured child
A Big Pine Volunteer Fire Department captain holds the head of a seven-year-old boy as he is carried to an ambulance by an EMT following a two-vehicle collision on U.S. 395 at Keough Hot Springs Road. Dennis Cleland, public information officer for the California Highway Patrol Bishop office, said that the collision occurred around noon in No. 1 northbound lane of U.S. 395 when a Toyota Highlander driven by Jennifer Bergland of Reno, Nev., ran into the rear of a Lexus ES300 driven by Lauren Burek of Arroyo Grande. Bergland, the seven-year-old boy, and a child in a car seat were all occupants of the Highlander and were transported from the scene by ambulance. Burek appeared to have suffered only minor injury and was treated at the scene.