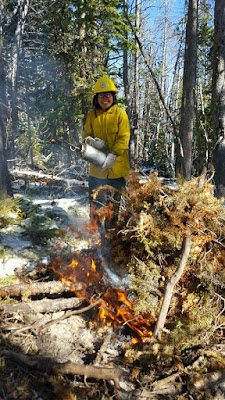 Some of you might remember Eden Solas, who spent some time in Wonder Valley a year or two ago. Well, now she's up in the Pacific Northwest working with forestry (I'm a little hazy on the details). Here's her latest missive. They've got her starting forest fires!

"My season at the Madison Ranger District is coming to a close so they finally let me set some of the forest on fire. This is a prescribed burn to help the biologists isolate and propagate the white bark pine that they have found to be immune to the rust fungus. This fungus has been decimating the white bark pine whose pine cones are a major food source for grizzly bears. So to protect the forest, sometimes you gotta light it up. They let me use a Drip Torch!"