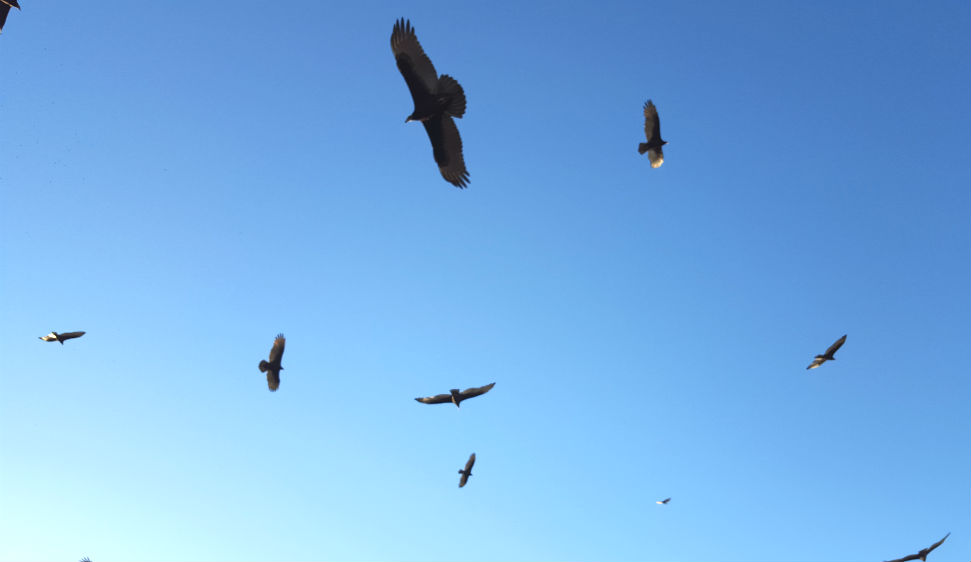 I was studying in the house last Friday about 4 p.m. when a large shadow passed slowly across the curtain. I went outside to see what it was and found a kettle of turkey vultures convening on my house. There were hundreds of vultures circling over my yard, from 10 feet over my head to hundreds of feet up in the air - to the point where they looked like pinpricks and then disappeared.

They dotted the treetops and vied for a couple of spots on the old TV antenna. They studded the old well rigging, and the tops of the power poles and fence posts, and lined up on the wire that brings power to the house. Dozens of vultures sat on the ground in the acreage that surrounds my house, and they landed in the trees of my three neighbors to the north, east, and south.

The only sounds were the whoosh of their wings as they descended from the thermals, the crackling negotiations of long wings and brittle branches as they landed awkwardly in the treetops, and an occasional hiss as one displaced another for a favored spot.

I quickly counted 32 vultures in my neighbor’s tree and multiplied that by the number of trees between the four of us and quickly exceeded 200 vultures, not counting those still incoming.

They sallied through the yard for the next hours, winding down as the sun began to set. An almost full moon rose over the Sheephole Mountains. The vultures settled into their spots, ringing my house as the trees do. I stood under the carport, half shielded not wishing to worry them with my presence.

My husband was returning around midnight and I called to ask him to come in without lights, and slowly. At midnight he rolled in on little cat feet, the gravel barely crunching under his tires. He got out of the car and we surveyed the yard. The moon shone off the sand like snow. The vultures sentineled the tree tops. Only one briefly took to wing and settled in again.

We woke early to watch them warm their wings in the rising sun, and then over the next hours, group by group, rise and fly east over the Pinto Mountains.
Posted by Ken and Teresa at 8:34 AM