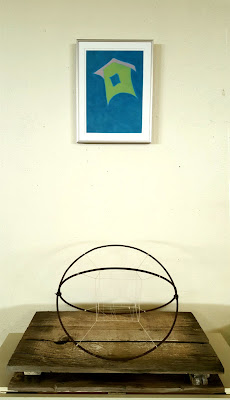 Wonder Valley artist Chris Carraher, the Wonder Valley Community Center artist of the month has three pieces on display from her cabin series.

From Chris' biography:
"Chris Carraher has been in the Mojave Desert for over 20 years and lives and works in a vintage homestead in Wonder Valley. The homestead cabins and the desert as both physical and metaphysical landscape have figured prominently in her artwork and in her community and environmental activism. She co-directed the Wonder Valley Homestead Cabin Festival in 2008, a pivotal event in bringing the homesteads into community social, political, and aesthetic consciousness. Her artwork concerning the homesteads has appeared throughout the high desert as well as in venues as diverse as Femina Potens Gallery in San Francisco and the Vargas Museum in Manila. In conjunction with Kim Stringfellow (Jackrabbit Homestead, The Mojave Project) she has presented on the topic at Farmlab in Los Angeles, Culver Center of the Arts at UC Riverside, and the 29 Palms Historical Museum and been featured in KQED ArtBound and the Jackrabbit Homestead Audio Tour. Find more of her work at www.magicgroove.net." 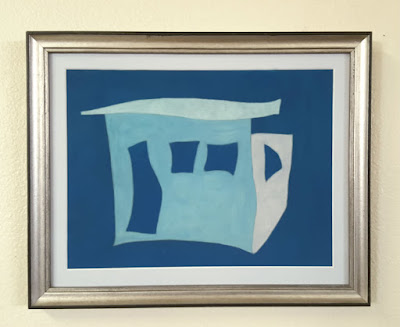 "What are all those shacks out there? Homesteading on government land is a tradition in the United States, but typical 160-acre farming parcels made little sense in the desert. However, recognizing the health and recreation benefits of the high desert, in 1938 Congress passed the Small-Tract Homestead Act. Five-acre parcels were made available not so much to farmers as to weekenders seeking relief from crowded urban conditions. The boom really got going after World War II when thousands of claims were filed in the Morongo Basin, sometimes sight-unseen in unbuildable washes or rock piles. Local companies such as Homestead Supplies grew by serving the 'Five Acre People', developing the quick-rising 'jackrabbit' cabin models that could be put up almost overnight to help meet the requirements for proving up a claim. The boom petered out and homesteading came to an end by 1976.
The wisdom of the Small-Tract Homestead Act is debatable, as neglected cabins became nuisances and providing infrastructure and services proved a challenge. The proliferation of small residential structures altered a wild desert unsuited to most human uses, but the desert, in turn, has continued to act on both the cabins and the residents, resulting in a dynamic 'tidal zone' of wilderness and human endeavor. Today, the 5-acre homesteads have become the basis of a special edge-culture built upon a combination of resourcefulness, creativity, determination, and diversity that is increasingly rare in the monotonous suburban landscapes of California."
Posted by Ken and Teresa at 9:35 AM