The Weed Show presentation by Ted Meyers was well-attended and very informative and got people thinking about the upcoming Weed Show on November 3 and 4 at the Old Schoolhouse Museum in Twentynine Palms. It is always fun to participate, whether or not you win any ribbons. And just looking at all the creative ideas displayed is fun. Don’t miss it! 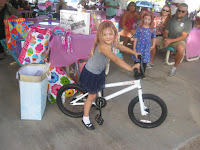 We send out Rainbows-of-Peridots-and-Gladioli to Dominick Bruxer and Ted Meyers (81) who celebrate their special days this week. Happy birthday, Ted and Dominick!


Karen’s Commentary:  Here’s some interesting information for all you Bank of America ATM users. I went to the Yucca Valley BofA and spoke to Operations Manager Fabiola Balladarez. I asked why the ATMs had been torn down and immediately replaced, if the new ones could be “easily moved” as I’ve heard, and if they’ll be installed elsewhere when Starbucks builds. First she said that BofA is under the impression that the Starbucks deal did not go through. Her answers to my questions are that the old ATMs were just routinely replaced with new ones, that they cannot be “moved” at all, and that they will most likely NOT be installed elsewhere in Twentynine Palms if Starbucks does build.
Darlene’s Commentary: I was telling a friend that my rooster had disappeared, and I was heartbroken. All I’d found was a trail of his beautiful tail feathers. A couple weeks later, my friend dropped by with a gift. There stood a huge rooster with the brightest colors and unique features anyone could ever imagine! He has long legs, big feet and fluffy feathers on his body and wings, with colors of cream, gray, yellow and black. His eyes are golden and he sports a huge brilliant red comb about three inches high. If that isn’t enough, the skin on his neck is also brilliant red! When he cock-a-doodle-doos, his neck stretches out about six inches longer than normal!


Tim Candelaria does a fine job on keeping our roads maintained. If you have any comments, compliments, issues, questions,complaints or suggestions, leave Tim a message at 760-367-9880. 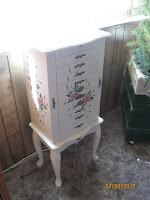 Handy Hint: To press and preserve flowers, open a heavy book, line pages to be used with parchment or waxed paper. Arrange flowers face down so they don’t overlap. Close book and leave untouched for seven to ten days, then remove totally dried flowers with tweezers. Use them to make bookmarks or stationery – or fill a picture frame with them.