Mark your calendars for two upcoming events at our Wonder Valley Community Center. First will be a reading on Saturday, February 2 by author William Hillyard from his forthcoming book “Welcome to Wonder Valley.” Second will be a CPR class presented by Morongo Basin Ambulance on Saturday, February 16. Contact WVCC Coordinator Teresa Sitz at teresa.sitz@gmail.com or 760-367-9880 for further information.
We send out Rainbows-of-Garnets-and-Carnations to Vida Hamilton who celebrates her special day this week. Happy birthday, Vida
Darlene’s Commentary: Here are a couple things you might want to try. Scanning your phone before bed can disturb your sleep because the bright blue light has a short-wavelength and can inhibit the production of melatonin which helps you fall asleep. To avoid that, turn your cellphone off at least 30 minutes before hitting the hay. Also, when you’re alone and bored, put your phone aside for awhile, like a half-hour or so, because when you’re bored, four different areas of your brain activate and work together to pull in random thoughts and combine them in unique ways, inspiring creative ideas. You might become a young Einstein – or an “oldster Einstein!” Give it a try.
Karen’s Commentary: There are notices on the Bank of America ATMs stating they will be removed on January 23. I called the bank and was told that they will indeed be permanently removed, but new ATMs will be placed in another location in Twentynine Palms, possibly Stater Brothers shopping center. There will be an approximate two-month time period though without any Bank of America ATMs at all because the company was apparently taken by surprise. They had been told the Starbucks deal fell through (which is what they told me months ago) so they replaced their old ATMs with brand new ones, but are now being told to remove their new machines so Starbucks can build! 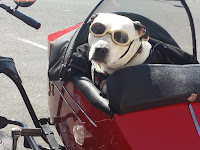 Animal Action League provides low-cost spay and neuter services for pets living in unincorporated areas such as Wonder Valley. They also provide low-cost microchipping and vaccinations, and are located at 62762 Twentynine Palms Highway, just west of the dinosaurs in Joshua Tree. For further information call 760-366-1100.

Handy Hint: Here are two easy tips. Unless you know for sure that you’ll need your checkbook to pay for something, leave it at home. Checks usually list your name, address, bank account number and routing number – all useful to a hacker. Also, put a baby picture into your wallet. Research suggests that wallets with baby photos are more likely to be returned.


Today’s Thought: “Honesty is the first chapter of the book of wisdom.” – Thomas Jefferson