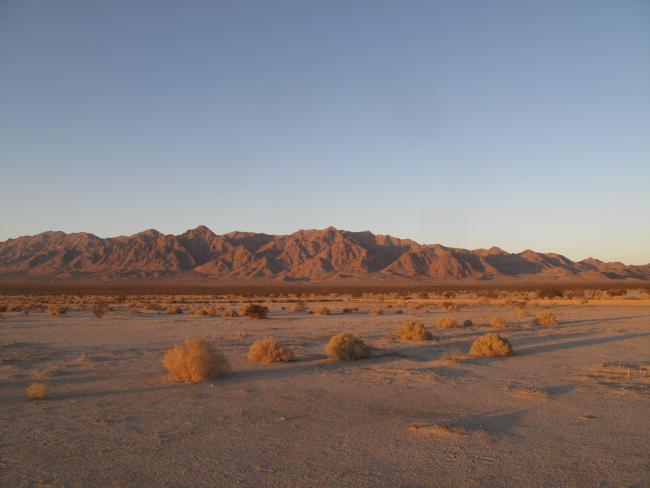 From May 23 through June 20, 2015, artist Carmen Argote, A Vast Furniture will be installed at the High Desert Test Sites in Wonder Valley.

The first part of the show will be installed at the MAK Center for Art and Architecture at the Schindler House in West Hollywood from April 17 – May 17, 2015.

For Part two, Argote’s sculpture will be separated from its defining walls and precisely reconstructed in an open landscape in the Mojave Desert, at the HDTS Iron Age Road Parcel in Wonder Valley. Here, Argote theoretically realizes an off-the-cuff proposal made by Schindler protégé Gregory Ain at an early Schindler House preservation meeting: considering the monumental costs of restoration and accounting for how West Hollywood had so radically changed since construction, Ain suggested to put the Kings Road property on the market, let it meet its inevitable fate, and use the profits to rebuild the house exactly to original specifications elsewhere, as an architecture study center: “Why don’t you do what Schindler did, just go out in the desert and build one? It doesn’t belong on a tree-lined, apartment-house neighborhood. It was built to be in the desert.”*
In Wonder Valley, the traced line-as-object will carry the influence and sociocultural imprint of the house. Within the outlined perimeter of vast horizons, the architecture of both spaces will be simultaneously activated. Visitors will be able to take up residence in the ghost image of the Schindler House as the sculpture will function both to define a campsite and host conversation around home ownership, cycles of prospecting throughout the region’s history, and the meaning of the outskirts to a city like Los Angeles.

Saturday, May 23, 2015
Opening reception, potluck, and overnight campout at the Iron Age Road Parcel, beginning at 6:00 pm (visitors may arrive at their convenience, but it is suggested to arrive at the site before sundown), with a guided tour at 7:00 pm. Sleep under the stars in the “Schindler House,” transposed to a remote destination in the Mojave Desert community of Wonder Valley.

Saturday, June 20, 2015
Far Enough Away, a conversation about the concept of transposing the frontier, at the Palms Restaurant and Saloon, 7:30 pm.

All programs are free and open to the public.