My husband Ken and I went to the Wonder Valley Well Owners Association biannual meeting on Sunday, May 3, at the WV Community Center. There were 28 people in attendance. Mary Quamme read the minutes from the last meeting of November 2014. At that time there were 92 members. We joined today so that brings the total to 94. 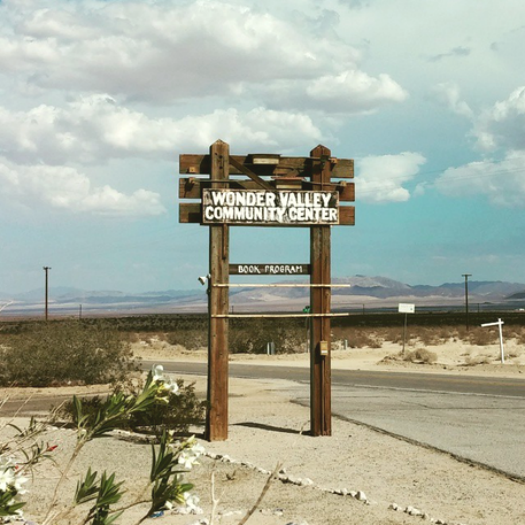 Clarence Chambers presided. He’s drilled most, if not all, the wells in Wonder Valley, including ours. He told the group about his recent work in the San Joaquin Valley and how the drought is affecting people there. It’s very bleak.

In contrast, Wonder Valley does not seem to be experiencing any more drought than usual. Our water table has not diminished. Water levels remain stable.  But then Wonder Valley has no agriculture or industrial or commercial wells. The EPA has deemed our water, Clarence told us, unfit for human consumption. Most people out here have reverse osmosis filter systems. Clarence told the story of an old-timer named Wetzle who drank unfiltered Wonder Valley water his entire life and lived to a ripe old age.

Grey water systems were promoted and those in the room who had hauled water before they got a well shared stories. Grey water is nothing new for Wonder Valley many people having practiced it for 30-50 years. Clarence said he knew people who survived on 2000 gallons of water a month.
There was a general consensus that the non-potability of our water is a positive that keeps powers and principalities from wanting to get their hands on it.

We were reminded how lucky we are to have wells and everyone agreed with the assessment. Clarence did remind us that if and when the power grid fails many of us will not be able to access the water in our wells. He encouraged everyone to get a small generator (about half the people in the room already had them), a Shurflo pump, and a tank for water storage.

The meeting changed gears and the issue of crime and starting a neighborhood watch was discussed. I took a straw poll and found most people do want to meet in the daytime so a Saturday meeting will be arranged with the Sheriff’s Department to discuss issues of crime, dumping, forming a neighborhood watch, and to learn more about the Citizens on Patrol program.


At the end of the meeting neighbors chatted. After awhile Mary Quamme, keeper of the key, turned off the lights, a subtle message that we didn’t have to go home, but we couldn’t stay there.
Posted by Ken and Teresa at 10:17 AM