Cinnamon Pete An Accomplished Burro.
A Pet of the Miners in the Virginia Dale District - He is a Cunning Thief and a Foe of Dogs. 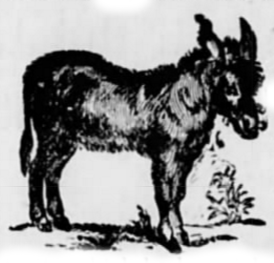 “Cinnamon Pete” is a brown-black shaggy-haired burro, possessing all the natural traits common to burros in general, as also some traits which he has picked up on his own account, and which clearly distinguish him from the burros in common. He was born and brought up out on the desert in Virginia Dale mining district, San Bernardino county. He is fat and round and brown like a cinnamon bear, hence his name. Pete is a cunning thief. He is too lazy to forage in the brush and makes a show of getting his living from the refuse of kitchens. But in reality he filches many a rich meal, much to the annoyance of people. He goes through their tents, crawls in and out of corrals after dark, breaks open boxes and eats sugar, bacon, dried fruits and coffee. He watches out for teams coming in and steals hay and grain, always looking out to do it when the teamster is out of sight.

One day he rushed up to a wagon and grabbed a half a sack of barley in his teeth and started off. Someone saw Pete take the barley and yelled: “Hi, there! Pete has got your barley!”

The teamster started after Pete. The burro ran, with the sack in his mouth, but saw that the teamster was gaining on him, so he put the sack on the ground, got on it with his feet and tore the sack open with his teeth, then gave it a shake a scattered barley all over the ground. The teamster could not gather it up, so went off cursing Pete. When the teamster went off, Pete gather up enough barley to make a good meal and went back to the sunny side of a powder-house, looking as if nothing had happened.

Another day Pete heard the distressful mewing of a kitten and went to investigate. He found that the kitten had in some way got into a tub of water at Baird’s well, and that a dog was preventing pussy from getting out. Pete tenderly lifted the kitten out with his teeth and placed it in a sunny place to dry. He then took the dog roughly by the nape of the neck, soused him in the tub and held his head under water until he was drowned.

Pete can whip the ugliest dog that ever strikes the camp. If a new dog comes into camp, Pete goes for him, grabs him with his teeth, and almost shakes the life out of him. All dogs coming into camp learn to respect Pete. Old miners love to sit around and relate the smart tricks of this uncommon burro. They really have a great deal of affection for him, and will not let any one abuse him. Yet they say that Pete is the plague of their lives.
-- Los Angeles Mining Review
From The San Francisco Chronicle, 21 Aug 1899