About 60 people attended the Holiday Potluck at the Wonder Valley Community Center last Saturday, which ran from noon to 3 p.m.

Volunteers Kevin Bone, Monica Shaw, Lisa Manifold, Steve Reyes and his wife, and Bill and Bob, helped Community MAC Delegate Teresa Sitz host the event. Ricardo Figueroa, the WVCC coordinator helped, too, setting up tables and cleaning up. DaShon made sure everyone had a name tag.

The staff from Pacific Clinics came and joined in the festivities.

Many thanks to everyone who came, and made such lovely dishes to share. 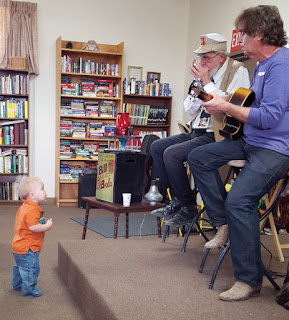 Little Jackson grooves as Bill and Bob play for the crowd. Bill and Bob often play at the 29 Palms Inn. It was much easier hearing them at the WVCC and their music was the perfect backdrop for a community gathering.

There had not been a community potluck in the two years I've served as the MAC Delegate. I was unsure how many people would come and was very pleased to see so many people attending. Others, who couldn't make it, dropped off contributions, which were gratefully received.
Posted by Ken and Teresa at 6:31 AM