If you missed the Community Meeting. 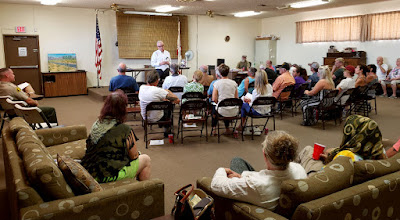 It was a big one, too, with 40 people attending. Speakers included Mark Lunquist from the Supervisor’s Office; John Bradshaw from SBC Special Districts Department, along with the new fella who will be grading our roads, Dylan Baudouine; Kimberly Pope and Jonell Kosen, from the Base; and Lt. Lucas Niles, Watch Commander at the Morongo Basin Sheriff’s Department at White Feather.

Mark Lundquist spoke about the new Vacation Rental Ordinance which will be addressed at the next Board of Supervisors meeting at 10 a.m., Tuesday, September 10. If you’d like to attend or comment at this meeting, you can join via videoconference at the Bob Burke Government Center at White Feather in Joshua Tree. Enter through the Sheriff’s Department. Leave all weapons in your car.

Lundquist’s second topic was the FP5 Fire tax.  It will be coming before the Board of Supervisors on September 24 to fulfill a mandate for County Fire and the SBC CEO to come back with another plan that the BOS will discuss. This is not  a board meeting but will be broadcast at the videoconferencing center mentioned above. County Fire still needs to cover a deficit of $27 million. Lundquist said this should have been on the ballot in the first place, and that he hopes it gets fixed soon so they stop pulling money from the general fund. The first FP5 payment of $157 and change will be on your next tax bill, but after that it’s anyone’s guess. Stay tuned.

Jonell Kosen from the Marine Corps Air Ground Combat Center spoke on noise levels from the Base. There have been fewer training exercises through the summer due to  the heat, but there will be more starting in October. Call (760) 830-9222, if you have a noise complaint.

Lt. Niles from the Sheriff Department notified the community the annual grant for illegal Off Road Vehicle enforcement has been tripled! This will allow them to buy more vehicles and assign more staff.