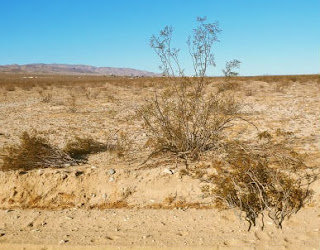 Two people were spied clipping creosote bushes on a road in Wonder Valley. Two separate cars stopped to tell the clippers that it was illegal to cut the creosote.

This poor chopped up bush may have been on private property but we're quite sure the clippers did not have the owner's permission. It is illegal to cut bushes on BLM (federal) land.

The clippers had large loppers and chopped this poor bush within an inch of its life -- see the two piles of branched to each side. Not only does this kind of trimming endanger the bush but it also endangers those insects and animals that depend on the creosote bush for their lives, including 21 bees specific to the creosote bush, several crickets, and other insects, and many burrowing animals, and even ants that collect the trichomes (seeds) dropped by the bush.
Posted by Ken and Teresa at 12:59 PM